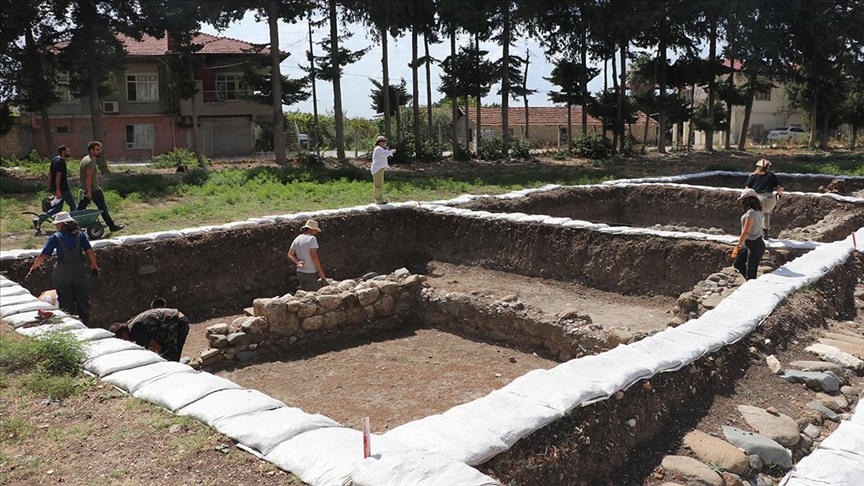 In the “Antakya Ancient Hippodrome” built during the Roman period, two places that were thought to have been used as entertainment and game venues and containing various game materials were unearthed.

In the ongoing excavations in the province of Antakya, located in the southeast of Turkey, the excavations are conducted by Prof. Dr. Hatice Pamir, a lecturer in the Department of Archeology from Hatay Mustafa Kemal University.

The excavation team is carried out with a team of 25 people, including archaeologists, architects, city planners and students from the archeology department of different universities.

The excavation team found two places used as game venues in the western part of the ancient hippodrome and bone dice used in games, game pieces and a piece of wind instrument.

Excavation Director Prof. Dr. Hatice Pamir said that they thought the building was built on top of the Hellenistic period structures and that data from this period were obtained. The structure is 513 meters long and 110 meters wide and dates back to 67 BC.

Additionally, Pamir stated that horse races and Olympic games were held in the ancient Hippodrome, which has two floors and a capacity of 80,000 people.

Noting that the Hippodrome was one of the magnificent structures of its time, Pamir said:

“Antakya Ancient Hippodrome is one of the most important structures in the world. If we think about it in terms of comparison, we can say the Circus Maximus in Rome. But we see from the records that this hippodrome actually goes back before that. The Hellenistic period goes back to the kingdoms period. We think that the Roman hippodrome was probably built on top of the Hellenistic period.”

Located on an area of 50 decares, the hippodrome has a “U”-shaped plan surrounded by two-story rows of seating.

Great festivals and organizations were held in the hippodrome in time. Pamir said, “One of them, once every four years, the competitors from all the Eastern Mediterranean coasts, from Egypt to Cyprus to Greece, were doing horse races here.”

Interesting artifacts were found in the excavations of the hippodrome

Excavation director said, “We encountered architectural remains and findings during the excavations in the western part of the hippodrome. We only dug two very small sites. During our excavations, we found marked game dice, game stones and broken pottery used for playing games. This led us to a thought. Besides such a large structure, they must have definitely built game venues. Since these places that we have already excavated do not give a housing plan, we have interpreted it as an entertainment venue or a place where visitors can have fun.”