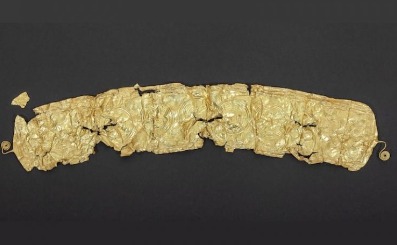 A farmer in the Opava region in northeastern Czechia, while working in his field, uncovered a Bronze Age golden belt.

The extremely well-preserved ornate piece will be on display at the Bruntál museum later next year.

The golden belt had been underground for thousands of years before it was unearthed by a farmer harvesting beets. The farmer, who wanted to remain anonymous, discovered this archaeological piece at the end of September and immediately contacted archaeologists from the Silesian Museum in Opava.

Jiří Juchelka, head of the museum’s archeology department, says that as soon as he saw the photograph of the object, he knew it was something extraordinary.

The initial hypothesis as to what the object was that the thin gold plate about 50 centimeters long was a crown. But after examining the object in more detail, experts now believe it was actually part of a belt.

“It has rose-shaped clasps with raised concentric circles at both ends. We realized it was too tall to fit on someone’s head. So we actually think it’s not a crown, but something much rarer – part of a belt.”

“At the past, this belt was made of leather and fastened in the front. When the farmer found it, it was probably bent as a result of agricultural activity, so it’s a miracle it was so well preserved. A few small parts may be missing, other than that it’s in excellent condition.”

Thin sheet metal is mostly made of gold, with some silver and traces of copper and iron.

According to Tereza Alex Kilnarová, conservator at the Bruntál Museum, a preliminary analysis of the arch places its origin in the 14th century BC.

How will the golden belt be distinguished from other periods?

“The arch is dated to the Middle Bronze Age to the Late Bronze Age, but this is only a preliminary determination based on ornamentation,” Kilnarová said.

“Because similar decorative objects can be found in other prehistoric societies, a more detailed research and analysis of the metal is necessary.”

“Due to the rarity of such valuable objects being created at the time, it most likely belonged to someone with a strong social standing. That’s why we’re talking about someone more respectable.”

“It is clear that the belt has a very important cultural and historical value,” said Kilnarová. “Such artifacts are rarely found even during excavations, thus this find is quite unusual for both our region and the entire Czech Republic. I think it would not be wrong to say that it will be one of the most valuable objects to be exhibited in our museum.”

The rare artifact, which will become part of the Bruntál Museum collections, will be extensively studied and preserved before being put on display to the public.