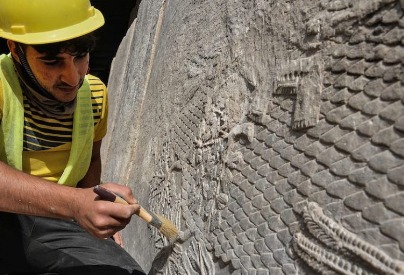 Archaeologists repairing the Assyrian gate destroyed by ISIS in Iraq discovered Assyrian reliefs that had not been seen for thousands of years.

Archaeologists in northern Iraq have unearthed some extraordinary Assyrian rock carvings from around 2,700 years ago. The gray stone carvings date to the rule of King Sanherib, who was in power from 705 to 681 BC.

The discovery was made by a joint US-Iraq excavation team that completed the reconstruction of the Mashki Gate, which was destroyed by ISIS militants in 2016, in Nineveh, east of Mosul.

Iraq was home to some of the world’s oldest cities and earliest civilizations, including the Babylonians, Sumerians, and Assyrians.

Around 700 BC, the Assyrian King Sanherib made Nineveh his capital and built the Mashki Gate (meaning God’s Gate) to protect its entrance. However, the gate was one of many historical monuments in the region that were victims of prolonged military conflicts and acts of cultural vandalism. It was rebuilt in the 1970s but was later destroyed by ISIS soldiers invading Iraq.

During the occupation, University of Pennsylvania archaeologist Michael Danti led a project to preserve cultural heritage in Iraq. “One of the locations I indicated ISIS had deliberately destroyed was Mashki Gate,” Danti said.

When the Iraq Heritage Stabilization Programme, directed by Danti, began work to rebuild the gate, they made a discovery that Danti described as “unimaginably rare.”

Beneath the remains of the gate were buried seven marble slabs, all belonging to Sanherib’s palace, with ornate carvings showing Assyrian soldiers shooting arrows and depictions of palm trees, pomegranates, and figs.

Danti said, “We were all shocked . It was like a dream. No one expected us to find Sanherib reliefs at a city gate. “

According to Danti, this particular chamber has never been excavated before, although archaeological excavations took place in the area in the 1960s and 1970s. While the gate was demolished, these remains were preserved because they were buried.

The discovery offers exciting new opportunities for research, and archaeologists are now returning to Mosul to delve deeper into the history of the Neo-Assyrian Empire.

While previous discoveries like these have been taken abroad (such as the Metropolitan Museum of Art in New York and the British Museum in England) – these slabs will remain in Iraq.

Danti says, “The Iraq government and the Iraqi people own these plates as official state property.” He adds that his fellow researchers at the University of Pennsylvania and Mosul were “absolutely pleased to find these reliefs.”

Groups like ISIS want to permanently cut off access to cultural treasures as part of their campaigns of genocide and cultural cleansing.