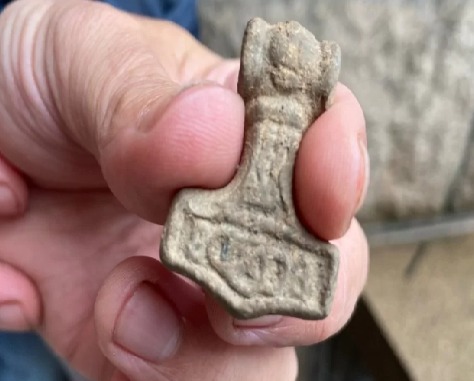 Archaeologists have discovered the so-called “one-of-a-kind” Thor’s hammer amulet, dating to the late 10th century, at Ysby in Halland province in southwestern Sweden. This amulet is also called Torshammara.

The hammer was unearthed near a planned future housing development. Previous excavations in the area have unearthed Neolithic and Iron Age artifacts, but the hammer found was the first Viking Age artifact found there. The artifact also has the distinction of being the first Thor’s hammer amulet discovered at Halland.

The name of the hammer, which forms the basis of the amulet in Scandinavian mythology, is known as “Mjölnir”. Mjölnir is the weapon of one of the most powerful Norse gods. For these reasons, symbols are closely associated with protective powers in the Viking Age. Thor also uses this weapon to protect Asgard, the home of the gods, from giants.

The amulet has a length of 1.18 inches. Thor’s dwarf-crafted hammer is cast from lead. The shaft has a hole so that it can be used as a pendant. The interlocking pattern is engraved on one side of the hammer head.

All of this points to the hammer’s use as a protective amulet that was worn around the wearer’s neck, according to the archaeologists

These were Viking-era accessories worn as apotropic amulets, invoking Thor’s protective power to fend off evil. About a thousand of them were found in England, Scandinavia, Russia and the Baltic countries.

This was worn when the Halland region was beginning to convert to Christianity. This type of pendant had religious significance beyond its supposed protective powers, as it was a clear symbol of devotion to the Form Sidr (“the old way”, i.e. traditional Nordic gods), as opposed to the newly adopted Christian way.

A rare Viking Age artifact is preserved by museums at Kulturmiljö Halland. After the initial restoration techniques are completed, the scientists will begin their work to analyze the metallic composition of the object.

Such works in the past were often silver or gilded. After the technical analysis to be made, it will be understood whether the work is covered or not.