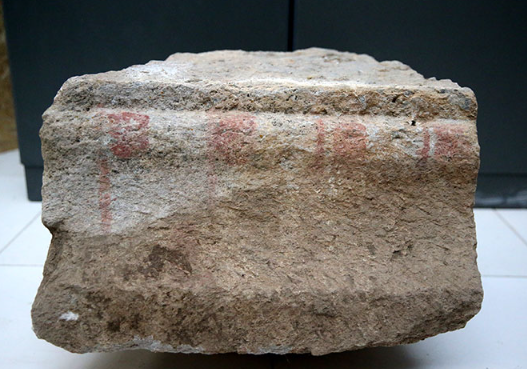 Cut stones with red dyes found in the Develi district of Kayseri revealed the biodynamic agricultural calendar of the Roman period. As a result of the examination of these stones, it was understood that agricultural activities were being scheduled according to the positions of the moon and stars.

Prof. Bilgin Yazlık (Nevşehir Hacı Bektaş Veli University) came across five cut stones on which various figures were engraved with red madder were painted during his trip to Develi in 2013 with his friends.

Based on the similar calendars used at that time and the figures on the stones, the cottage revealed the biodynamic agricultural calendar, which is the oldest and most environmentally friendly sustainable farming method from the Roman period.

Yazlık stated that they were able to date the stones thanks to the 4th century coins that were unearthed during the excavations in the region in 2005.

Indicating that there were pictures on the stones, Yazlık said that they saw “the houses of the moon and the dots arranged in a systematic way, resembling constellations”.

As a result of the examinations, it was understood that the stones were parts of the biodynamic agricultural calendar, in which agricultural activities were scheduled according to the positions of the moon and stars. Yazlık stated that “the calendar used in the Roman period is the only and first known example in Anatolia”.

Yazlık, who wrote an article in the Journal of Nevşehir Hacıbektaş Veli University Social Sciences Institute, said, “He produced the interconnected diagram of 5 parts. He stated that such an example has never been seen before, and they have established a relationship with the samples collected in the past years.”

Yazlık stated that Anatolian people have been farming for thousands of years according to the phases of the moon and astrological sequences. He stated that the tradition was written with the obtained biological calendar.

He stated that the stones with a history of 1700 years are very important for the town of Develi. He added that they expect regional tourism to develop thanks to these stones.