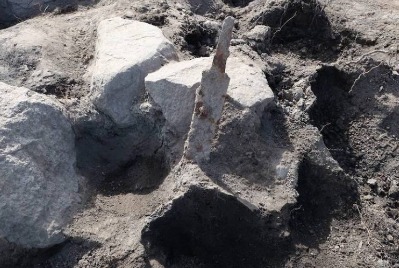 Archaeologists from the Swedish National Museums of History have unearthed about 100 tombs and two tumuli dating from AD 600 to 1000 AD at the burial site in Västmanland.

In one of the tumuli, archaeologists found three stone tombs that were added several centuries after the original tumulus. When they started digging these tombs, they noticed two handle-like shapes protruding from the rocks.

“How was the Viking sword discovered?”

While carefully excavating the area to widen a road in Sweden, they discovered a pair of Viking-era swords.

As can be seen from the photographs, the corroded handles appear to be intertwined with the nearby light brown rocks, protruding slightly above the rocks, and appear to be distinctly man-made

Experts say the swords were driven vertically into two tombs about 1,200 years ago. Archaeologists think the position of the swords may offer a way to honor those buried underneath and for the living to remember the dead.

Archaeologists say cemeteries in the Viking age were considered places for the living and the dead. People performed rituals, ate sacrificial meals, and interacted with the dead long after they were buried.

According to archaeologists, the discovery of swords was unexpected and rather unusual. So far, only 20 Viking-age swords have been found in the Västmanland region.

Archaeologists say the cemetery was built on the remains of an old farm.