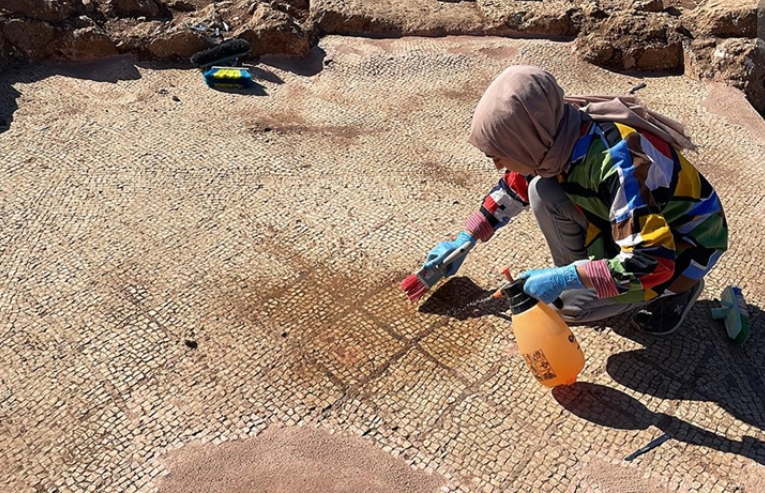 A 1,800-year-old mosaic floor was found in the Perre Ancient City in Adıyaman. It is known that the Ancient City was one of the five largest cities of the Kingdom of Komagene.

It is known that the Kingdom of Komagene was one of the kingdoms of the Hellenistic period. Today, it covers the provinces of Adıyaman, Gaziantep, and Kahramanmaraş. It continued to exist until it came under Roman rule in the 17th century AD.

Excavations started in 2001 under the coordination of Associate Professor Kahraman Yağız (Adıyaman University Archeology Department Lecturer). In this year’s part of the excavations, a 12 square meter mosaic floor was unearthed.

Adıyaman Governor Mahmut Çuhadar examined the excavation area and got information from Museum Director Mehmet Alkan. Çuhadar said in a statement, “The region is a living space. A mosaic floor was found in the last studies. It is thought that the mosaic belongs to the 200 – 300s from the Roman period.”

In another statement, it was stated that “the excavations in the region known as the Ephesus of the East continue, and as a result of the excavations, important works will be brought to the world and Turkey tourism.”

“How was the structure of the mosaic?”

Adıyaman Museum Director Mehmet Alkan stated that “A social living area was found in the excavations carried out in the necropolis area last year, especially a weaving workshop and a 2nd century mosaic floor on the lower floor”.

Alkan said that the excavation work was quite exciting. Also, “the mosaic floor consists of black, white, and blue pieces. On the side, there is a floor made of bricks and 4 entrances,” he said.