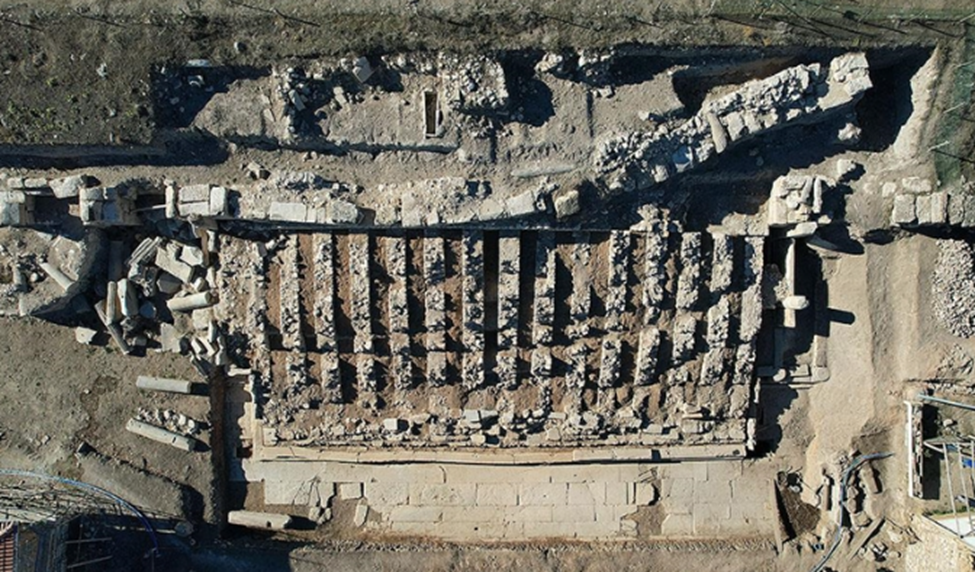 In the ancient city of Aizanoi, in the Çavdarhisar district of Kütahya, the remains of a 2,000-year-old fountain-like fountain belonging to the Roman period were unearthed.

The ancient city is home to the best preserved Temple of Zeus in Anatolia. It was included in the UNESCO World Heritage Tentative List in 2012. This year’s part of the excavation work continues with the support of Kütahya Governorate and Kütahya Dumlupınar University (DPU). Sponsorship of Halk Investment and Gürok Tourism and Mining.

Excavation Director Prof. Dr. Gökhan Coşkun said, “Excavations in 2022 in Aizanoi were carried out in the agora (bazaar), Penkalas Stream, and the theater.”

According to Coşkun, “In 2021, the entire staircase structure of the Temple of Zeus was brought to light. Just in front of the staircase (the courtyard of the agora), marble floors and the courtyard began to be unearthed.”

“Remains of new stores from the ancient period were unearthed in the agora,” claims Coşkun.

“Like all other ancient cities, the heart of Aizanoi beats in the agora. In the bazaar of Aizanoi, there was a nearly square open courtyard 95 meters long. The floor of the courtyard was paved and covered with large marble slab stones. During the excavations carried out last year, 4 shops were unearthed in the south of the agora. During the excavations, rows of shops similar to those in the east were found in the south of the agora.

One of the shops was uncovered. It was stated that other shops were also lined up side by side. The fountain found is similar to the one found in the ancient city of Kibyra in Burdur.

One of the most significant discoveries made during this excavation era, according to Coşkun, is a fountain that is about 2,000 years old.

It was stated that the remains belonged to a round-planned nymphaion (fountain) structure in the northeast corner of the courtyard of the agora. It was added that such architectural remains are not frequently encountered in archaeological excavations.

Archaeologists stated that the rare fountain remains are very pleasing. The water comes to the fountain from the canal in the center. It is also stated in the statements that the structure resembles today’s fountains.

Coşkun remarked, “The agora was frequented all day long in antiquity. Traders benefit from this fountain. The fountain is made of marble in the form of a round pool. The water comes from a channel in the middle, there is also a drainage channel.

Coşkun said, “For the first time, a circular planned structure with a diameter of 5 meters and a diameter of 20 centimeters was encountered in Aizanoi. An example in Anatolia was found in the ancient city of Kibyra in Burdur.”