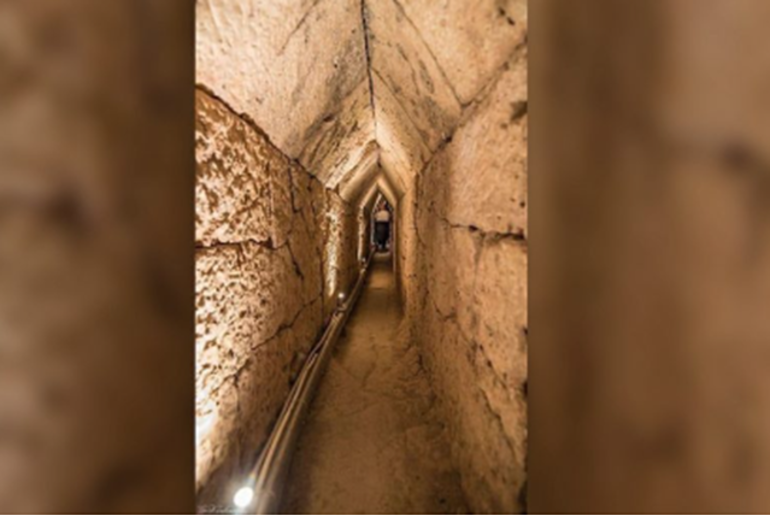 Archaeologists excavating under an ancient temple in Egypt discovered a tunnel that carried water to thousands of people in its heyday.

According to the statement made by the Egypt-Dominican Republic archaeological team, the approximately 1,305-meter-long structure was unearthed, providing water to thousands of people in its heyday.

Kathleen Martínez, an archaeologist from Dominica and director of the team that discovered the structure, says ancient Egyptian builders built the two-meter-high tunnel about 20 meters underground.

“The Eupalinos Tunnel in Greece, which is regarded as one of the most significant engineering feats of antiquity, is exactly replicated in this structure,” according to Martinez. The Eupalinos tunnel on Samos, a Greek island in the eastern Aegean Sea, was also built to carry water.

The archeology of the Taposiris Magna temple is quite complex. Part of the temple has been flooded and has suffered great damage as it has been subjected to numerous earthquakes throughout its history of existence.

“History of the Tunnel”

The tunnel at Taposiris Magna dates to the Ptolemaic period (304 BC–30 BC), a time when Egypt was ruled by a dynasty of kings descended from one of Alexander the Great’s generals.

According to Martinez, two alabaster statue heads were found among the finds inside the structure. One of them probably depicts a king, and the other represents another high-ranking person. The exact identities of these people are not yet known.

Coins and the remains of statues of Egyptian gods were also found in the tunnel, Martinez says.

When the tunnel was built, Taposiris Magna had a population of between 15,000 and 20,000. The tunnel was built under a temple honoring Osiris, the ancient Egyptian god of the underworld, and the Egyptian goddess Isis, who was Osiris’ wife. He uncovered a pile of coins depicting Cleopatra’s face. Excavations at Taposiris Magna and analysis of the artifacts in the area continue.

0 thoughts on “Wide Tunnel Found Under an Ancient Egyptian temple”