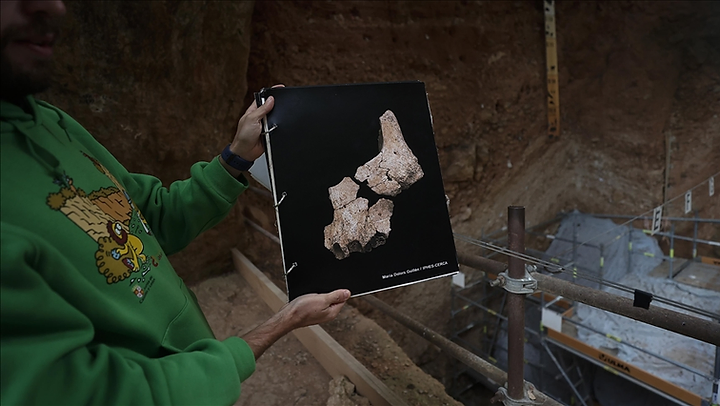 At the end of June, 1 million 400 thousand-year-old ancient human fossil were found at the Atapuerca archaeological excavation site near the city of Burgos in northern Spain. Fossil scientists were very excited.

Although the search continues for facial parts belonging to the first human species found in Atapuerca on June 30, scientists said that these fossils are at least 1 million 400 thousand years old. He states that it is the oldest human fossil ever discovered on the European continent.

Archaeologist Aurora Martin, General Coordinator of the Museum of Human Evolution in Burgos, said in a statement to the AA correspondent, “We are still very happy and excited because it is so new. We are talking about 1 million 400 thousand years ago. We do not yet know which first human species the fragments found belonged to. A breakthrough that will help rewrite the history of human evolution.”

“Remains unearthed at Atapuerca showed that the arrival in Europe from Africa was earlier. Until 1994, the first human species in Europe were thought to date back 500,000 years. We are currently talking about 1 million 400 thousand years ago. So we went back almost 1 million years. This is really important.”

The Spanish Archaeologist, who stated that the studies on the Paleolithic Age (Old Stone Age) are now in their golden age, “We always act on theories. We try not to seek the truth but to find answers to questions. With the help of new technologies, all the new findings of ancient human species bring us new questions.”

Where are fossil found?

Explaining that Atapuerca was discovered during a railway work intended to be built in the region at the end of the 19th century, and the first excavations began in 1976, Martin said that the oldest human fossil ever found in the European continent was found in the region in 2007 and is 1 million 200 thousand years old. Martin also noted that he had a mandible (lower jaw).

There are currently 10 different excavation sites in Atapuerca. Work continues in 3 of these excavation areas. “Work at this excavation site will continue for many years,” Martin said.

The facial parts are 1 million 400 thousand years old. The new find emerged about 2 meters below the jawbone found 15 years ago.

Ancient stone age human and animal fossils unearthed in Atapuerca, a World Heritage Site, are on display at the Human Evolution Museum in Burgos.