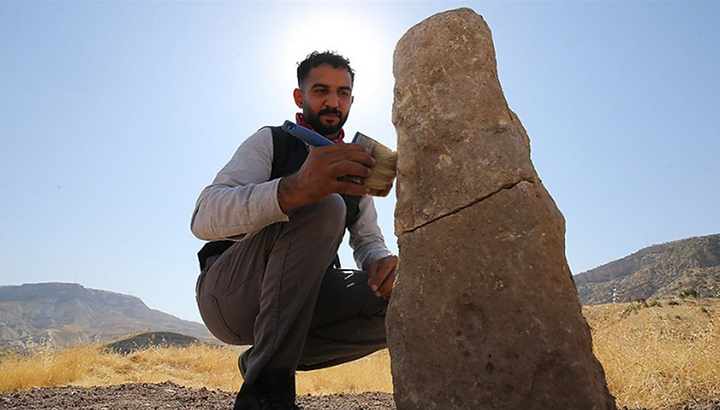 The remains of a 12,000-year-old “public building” were found during the excavation work carried out in Boncuklu Tarla (Beaded Field) in the Ilısu District of the Dargeçit district of Mardin.

Throughout history, the region has hosted 25 civilizations, including Sumerian, Akkad, Babylonian, Hittite, Assyrian, Urartian, Roman, Abbasid, Seljuk and Ottoman. Archaeological excavations started in 2012 by the Mardin Museum Directorate within the scope of “Works on Documentation and Recovery of Cultural Assets Remaining in the Interaction Area of the Ilısu Dam and HES Project” continue at intervals.

With the “Boncuklu Tarla Neolithic Age Settlement Landscaping Project” carried out by the Dicle Development Agency and Mardin Metropolitan Municipality. Excavation works completed in an area of 4 decares in Boncuklu Tarla.

Within the scope of the project with a budget of approximately 10 million liras, the region will open to tourism with the completion of excavation works on an area of 11 decares.

It is called “The Field of Beads” because there are too many beads. During the excavations carried out this season by a team of 15 archaeologists, anthropologists, archaeologists and archaeobotanists under the leadership of Ergül Kodaş (Mardin Artuklu University Archeology Department Lecturer Assoc. Dr.), the remains of the “public building”, which was built for 3 periods and is stated to be 12 thousand years old, were found.

Assoc. Dr. Ergül Kodaş told Anadolu Agency (AA) that the excavations carried out by the Presidential Decree as of 2020 in the area where the works have been carried out intermittently since 2012, have been continuing since last year with the support of the Turkish Historical Society.

Stated that Boncuklu Tarla is a settlement dating to the Pre-Pottery Neolithic Period. And that its name entered the literature in this way after the villagers found so many beads there. Kodaş said, “It determined that there was an uninterrupted occupation in the Boncuklu Tarla from 13 thousand to the end of 8 thousand BC. Architectural remains, skeletons, small finds and many beads from different periods were found.”

Kodaş noted that the excavations continue in the 300 square meter area in the easternmost part of the mound.

Assoc. Dr. Kodaş stated about the “public building” whose remains found during excavations. “An important part of the building, which built 3 times, dating back to 10,000 BC, was unearthed. An entire building was unearthed. These are large sized structures that have been used by many non-residential individuals or groups.”

Kodaş states that “In the structures, steles, buttresses and there are columns.” He also stated that it was determined that the building was built in a different way from the residence. In terms of both its architecture and interior arrangements.

Kodaş stated that as the excavation progressed, they realized that there were structures belonging to two different phases under this building.

Buildings of similar dimensions and features built on the same site

Kodaş stated, “Buildings of similar dimensions and features built on the same site one on top of the other. All of the phases belong to 10 thousand BC. After one abandoned, they filled up and built a new one on it. We can’t know the exact time between each phase, but it wasn’t too long.” Also stated that the use of “public buildings” could not determined exactly for what purpose, but it will clarified in the future.

Kodaş stated the importance of bringing the region to tourism with the project prepared by DİKA and Mardin Metropolitan Municipality. It was also stated that in the later stages of the project, a welcome house is planned to be built in the area to be taken under protection.

Kodaş said, “In the future, both scientific excavations will support and the promotion and cultural heritage of the region will be able to reach wider masses.”

Demirbağ, who stated that they were happy to reach the new ruins, expressed that they are also pleased that the area will be brought into tourism.

A large number of finds from the Epipalaeolithic Period to the Late Pre-Pottery Neolithic Period B have been unearthed so far in Boncuklu Tarla. Which covers an area of approximately 2.5 hectares.

During the excavations, architectural remains, houses, private buildings, “public buildings” and the skeletons of 130 individuals in the tombs. More than 100 thousand beads and a temple thought dated to 11,300 years from the Neolithic Period.

It was announced that the last temple found in Boncuklu Tarla is estimated to be 12 thousand years old.