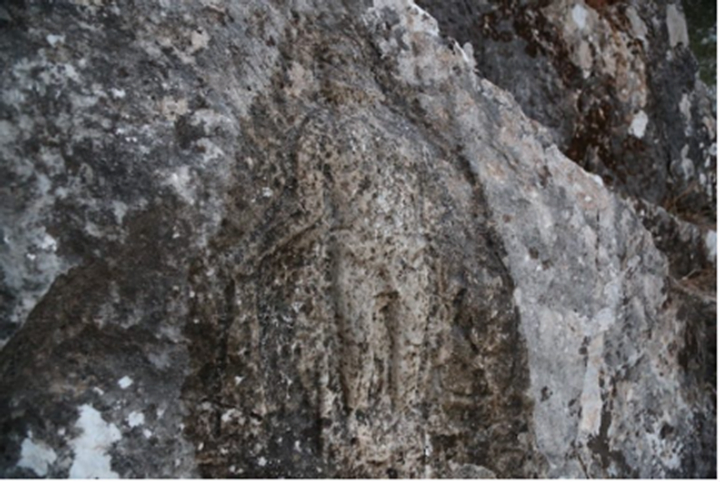 A person wandering around a marble quarry in Muğla to take a video discovered a previously unknown relief depicting Heracles.

A person named Recep Aşık found a previously unknown ancient relief in the Milas district of Muğla. An investigation was started on the relief, which is thought to depict Heracles.

A documentary he watched inspired Recep Aşık. He decided to shoot a video for the use of social media in the mountainous area where the ancient marble quarries are located.

Recep Aşık learned that Hekatomnos, King of Caria, lived in the region in the past, during his research to prepare a video. Aşık learned from the sources that there were ancient marble quarries on Sodra Mountain in the district. After that, he started to wander around the area to take pictures.

Noticing a relief on the marble surface, Recep Aşık reported the situation to the Milas Museum Directorate. According to the examinations, it is thought that the relief depicts Heracles and was made about 2,000 years ago.

The officials of the Milas Museum Directorate, who examined the region, started to work to declare the area as an archaeological site by examining the relief and its surroundings.

The purpose of the Heracles relief is to protect the workers working in the quarry and to perform their religious worship in ancient times. In Greek mythology, Heracles was the son of Zeus and Alcmene, the daughter of the king of Mycenae. In that century, statues and reliefs exist to protect people from evil. Heracles reliefs exist to instill and protect the morale and physical strength of the workers working in the quarries. The mythological character believed to have divine powers is Heracles in Greek mythology and Hercules in Roman mythology.

Recep Aşık’s aim is to find Hekatomnos, King of Caria. Strive for this purpose, Recep Aşık is very happy to have found a work that has not been recorded before.

Recep Aşık said, “Hekatomnos reliefs and statues came to the Gümüşkesen Monument. After that, I wondered where the white marbles transported to Euromos Ancient City were brought from, and I started to search. While searching for the mines, I noticed a relief carved on such a stone. I informed the museum authorities.”