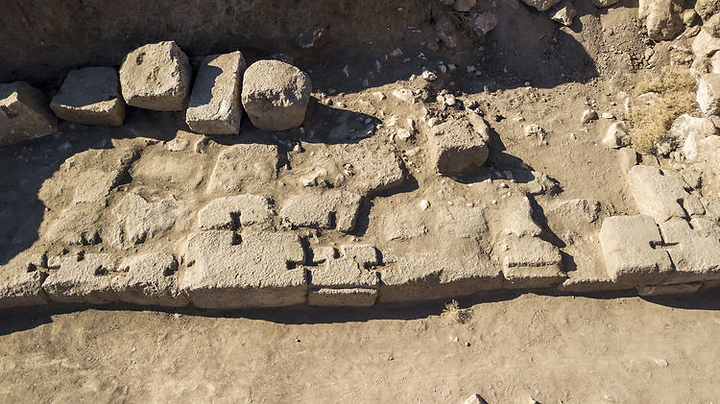 4 Aramaic inscriptions were found in the ruins of the ancient city with a grid plan in Van province in eastern Turkey. Thanks to these inscriptions, it is expected that important information about historical remains will be revealed.

The inscriptions in Erçiş district are 2.5 kilometers long and 1.5 kilometers wide. Excavations are carried out in the grid-planned historical city ruins with the permission of the Ministry of Culture and Tourism.

In the studies carried out under the direction of Van Museum Director Erol Uslu and under the scientific consultancy of Van Yüzüncü Yıl University, Faculty of Letters, Archeology Department Head Prof Dr Rafet Çavuşoğlu, 4 aramaic inscriptions that are considered to belong to the Parthian Empire were found.

The city is the first example of the modern mass housing concept in Eastern Anatolia. It is aimed to obtain important information by deciphering the protected Aramaic inscriptions.

Stating that the unearthed artifacts gave important clues about the history of the city, Uslu said that the previous destructions of the outer walls of the ancient city were removed from the rescue excavations and some of the walls were unearthed.

“The writings on the wall are quite interesting”

Noting that there is no area to point to a door in front of the eastern wall, Uslu gave the following information:

“Four inscriptions with Aramaic inscriptions carved into the body wall of the outer walls emerged. Scientific studies are continuing on these inscriptions. The analysis and transcription of the four inscriptions is very important to provide clear information. Initial data suggest that this building belongs to the Parthian Empire period. There are serious data and findings that the Persians and Parthians established dominance in this region after Urartu. The main purpose here is both to reveal the historical and cultural texture of this place and to bring more people here by bringing it into tourism. Apart from the ancient city of Zernaki Tepe, as an architectural remains from the Parthian Empire, no structure has been registered in the museum until today. These typefaces, which we define as Aramaic, first appeared in this ancient city.

Prof. Dr. Çavuşoğlu also stated that they concentrated the excavations in the northern wall section of the city and they encountered four inscriptions that they considered important here.

Stating that the expert team continues to work on the solution of the inscriptions, Çavuşoğlu said:

“They seem to be inscriptions of the Parthian Empire period, but their analysis will tell us much clearer things. It will allow us to give a clear date with carbon analysis. Aramaic inscriptions are very important for Anatolian archeology. The Aramaic inscription appeared on an architectural wall for the first time in the Eastern Anatolia Region. Another important point is that this place has a grid plan. Between 7 thousand and 14 thousand people lived on this hill. It’s very important for archeology.”