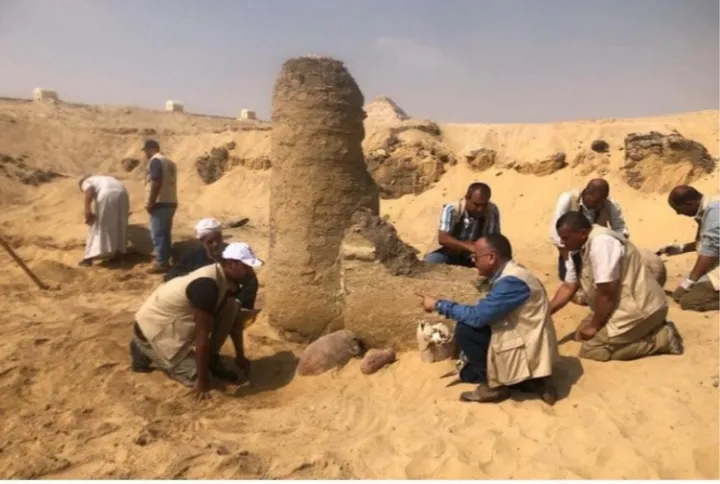 Archaeologists working at the Saqqara necropolis in Egypt unearthed several blocks of feta cheese dating to the 26th dynasty (664-525 BC).

In the statement made by the Ministry of Antiquities, it was stated that the find was revealed during the excavations of the sixth season.

According to the statement, archaeologists unearthed a series of clay pots containing cheese and with Demotic writing (ancient Egyptian writing also found on the Rosetta Stone).

Waziri, Secretary General of the Supreme Council of Antiquities, stated that the ancient Egyptians called feta cheese, which turned into the word “Haloum” in the Coptic times, “Haram” and is now known as “Halloumi cheese”.

Archaeologists excavating in Sakkara said they expected other pottery to be found.

The Saqqara necropolis is home to the most important archaeological remains of Egypt. Various missions in the region since 2018 have unearthed a collection of over 100 sarcophagi. A great number of high-profile finds were the subject of a Netflix documentary in 2020.

Saqqara is located 24 kilometers southwest of Cairo. It is known as a region where the inhabitants of Memphis, the oldest capital of Egypt, are buried.

There is also the Zoser Pyramid, which is thought to have been built in the region around 2500 BC. The height of the pyramid is 63.17 meters. The pyramid is also the world’s first major monumental design made of stone.

Famous architect Imhotep made this structure, which is the first example of a stepped pyramid.

About a hundred years ago, archaeologists working in the Saqqara region of Egypt discovered a sarcophagus weighing 90 tons. The ancient Egyptian temple Serapeum of Saqqara, discovered by archaeologist Auguste Mariette, was built by the 19th Egyptian Dynasty pharaoh III. It is estimated to date back to the time of Amenhotep.