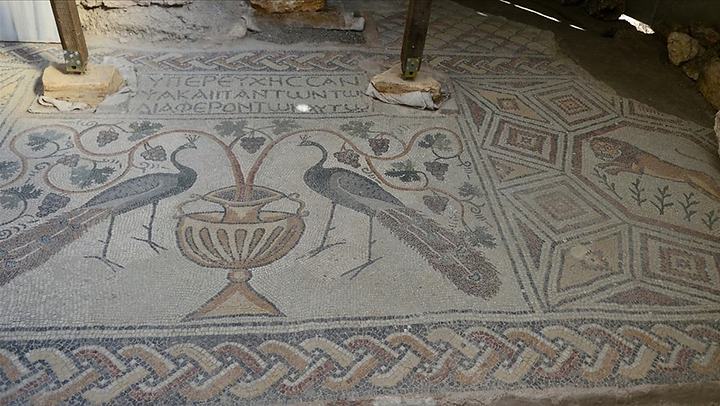 New mosaics with various figures appeared on the floor of the square planned building in the Hadrianopolis Ancient City. It was a settlement during the Late Chalcolithic, Roman and Early Byzantine periods.

The excavation team announced that a new square planned structure was found. The square-shaped inscription addressed to Asclepius appeared last year. It is thought to have been for military purposes, as it was addressed to Asclepius, used for health purposes, and holding a Roman soldier’s mask. Adjacent to this structure, a new structure emerged, with undamaged new mosaics at its base.

Archaeologist Sinan Ekinci, Deputy Head of Hadrianopolis Excavation, gave information about the excavation and restoration to the AA correspondent.

“The roofing process continues in two areas. We are opening the walls of the Roman Castle. There is a new structure inside the castle that we started to excavate this year. It is difficult to say anything about what the building is now, but the mosaics unearthed show that it was a beautiful building. There are mosaics in various parts of this square planned building. There are various bird and amphora figures and grape basket decorations on the mosaics. Apart from this, we think that it will appear in new mosaics.”

The ancient city of Hadrianopolis is in the province of Karabuk in the northern region of Turkey.

The city is located in the South Paphlagonia region. It was a settlement during the Late Hellenistic, Roman and Early Byzantine periods. In addition, the area around the area became a concentrated spreading area.

The ancient city, where the rivers Geon, Phison, Tigris and Euphrates mentioned in the Bible are located, and which is famous for the mosaics on the floors of the churches where many animals are depicted. The ancient city is known as the “Zeugma of the Black Sea”. In the ancient city, structures such as two baths, two churches, a defense structure, rock tombs, a theatre, an arched and domed structure, and some cult areas have emerged.

From past to present, Turkey has hosted many different civilizations. Among them are the breathtaking mosaics of the Roman and Byzantine Empires. For this reason, Turkey has many beauties in the field of art, especially in the field of mosaics, besides its archaeological sites.

You can witness mosaics in many different patterns and shapes in most museums of Turkey. It is also home to many mosaic museums, two of which are the largest in the world!