The True Source of Archaeology
Archeotips > Archaeology - News > The earliest traces of opium use, dating to the 14th century BC, have been unearthed in Israel 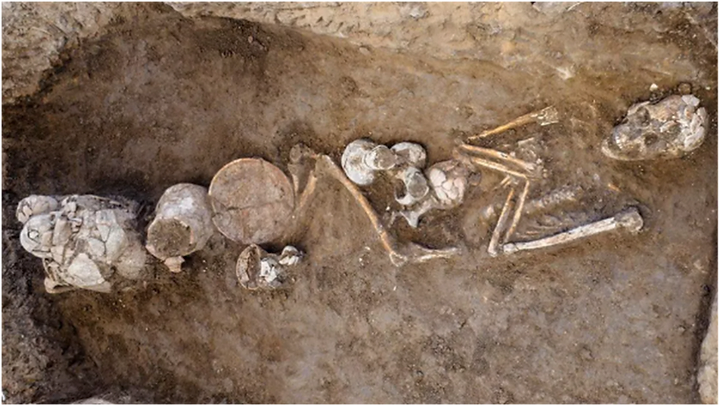 The earliest traces of opium use, dating to the 14th century BC, have been unearthed in Israel

The earliest evidence of Late Bronze Age opium use from the 14th century BC was discovered at a burial site in Israel. A small amount of narcotic remains was unearthed in eight of the 22 ceramic vessels found in the tomb.

The narcotic residue is thought to have been obtained using the seed pods of the poppy plant. The relic was unearthed in an area known as Canaan in Tel Yehud, outside Tel Aviv. More than half a dozen 3,500-year-old pottery vessels have been found here.

The skeletal remains of a male buried with jugs that contained opium residue were found in Israel. (Image credit: Israel Antiquities Authority)

The tomb was unearthed in 2012 by archaeologists from the Israel Antiquities Authority and the Weizmann Institute of Science. In the tomb, a 40-50-year-old male skeleton and opium-laced pottery were found.

As a result of research on 22 jars and jugs, eight of the ceramic vessels were found to contain traces of addictive drugs. It was stated that some of the artifacts with opium residues resembled the bulbous shape of an inverted poppy capsule. According to the statement made by the researchers, looking at the clay bands on the long-necked vessels and the pottery decorations in that region, it was stated that some of them were imported from the island of Cyprus, west of Tel Yehud.

We found opium in some containers

According to a study by Nature, the opium poppy plant probably grows naturally in the Mediterranean. This plant has been cultivated by pioneer Neolithic communities since the middle of the sixth millennium BC.

“There was a hypothesis that some of the jugs found in 2017 might have contained opium because they looked like poppies.” Vanessa Linares, a doctoral candidate at Tel Aviv University, told Live Science, “we found that was the case and that opium was contained inside some of the vessels.”

Linares also noted that there are several theories based on documents from other ancient civilizations around the world.

For example, “The Sumerian priests used opium to attain a higher state of spirituality, while the Egyptians reserved it for both priests and warriors. It also appears to be used not only for a psychoactive effect, but also for medicinal purpose. The main purpose of using it medicinally is to reduce pain.”

“It may have been thought that the poppy in the tomb was there for the purpose of an offering, perhaps to the gods, and that the deceased might need it in the afterlife,” Linares added.