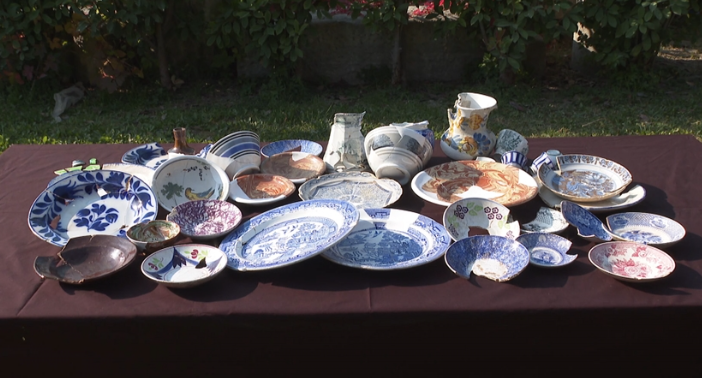 400-year-old ceramic found in the Smyra in Izmir

Ceramic plates and pots belonging to the 17th and 19th centuries of the Ottoman Empire were found during the excavations in the Ancient Agora of Smyrna.

The ceramics found in the excavation came from Italy, England, Belgium, France and the Netherlands. Excavations continue with the support of the Izmir Metropolitan Municipality and the permission of the Ministry of Culture and Tourism.

The chairman of the excavation committee is Associate Professor Akın Ersoy from Izmir Katip Çelebi University. Ersoy said that the found remains cover the period from the Hellenistic Period to the establishment of the Republic.

The cultural heritage in Smyra starts from the Ancient Age and goes back to the Ottoman Period. Ersoy said, “The ruins were artifacts that reached Izmir Port from the 17th to the 20th centuries. There are also European ceramics among the artifacts arriving at the port. ”

There are both Ottoman period ceramics and imported from Europe in the area. Ipekçioğlu said, “These artifacts reveal 300 years of history, table culture or food culture in Agora.”

The oldest ceramics found in the area have an Italian signature. In addition, among the finds are examples made with the over-glaze technique called “majolica” and ceramics made with sgraffito.

“Enjoy your meal” in Ottoman Turkish in ceramic

Ipekçioğlu said, “Italian ceramics were processed with the underglaze technique in the artifacts found. As the period progressed, screen printing was produced with samples taken from China. There are very important examples of serigraphy printing from the 19th century in Agora. The production of ceramics for the Ottoman market in Europe emerged with the examination of the works.There are ceramics with the inscription ‘Enjoy your meal’ on them and produced entirely for the Ottomans.”

Ipekçioğlu said that “ceramics with crescent and star embroidery came to the Ottoman lands after being produced with molds from Anatolia and processed in Europe.”

Used in paintings and ceramic patterns

There are not only Italian artifacts in the Smyrna Agora excavation area. Ipekçioğlu said, “We come across materials from regions such as France, Belgium, Netherlands and England. These products are not only important for the Ottoman Empire, but also for the European market. For example, we see that 19th century Dutch painters used ceramics with different colors in their paintings and used them as objects in their paintings.”

There are very good examples of Ottoman local pottery from the Kütahya, Istanbul and Çanakkale regions in the area.

Ipekçioğlu said that ceramics point to the details of the kitchen and table culture. In addition, there is both Levantine culture and local table culture in Izmir. The pots found are in sets. All these are signs of a beautiful table and cuisine culture.