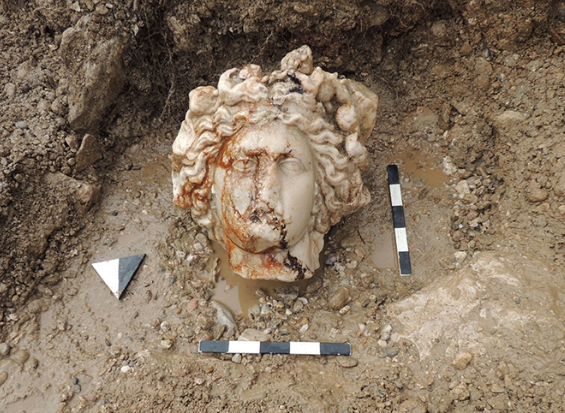 Statues belonging to the pagan faith were found in the excavations of Aizanoi in the Çavdarlı district of Kütahya.

Statues fragments belonging to the pagan belief, thought to have been broken and thrown into the tea, were unearthed during the archaeological excavations in the Aizanoi Ancient City. It is thought that the statues disintegrated due to the pagan people’s conversion to Christianity.

The Ancient City of Aizanoi is on the 2012 UNESCO World Heritage Tentative List. The Ancient City has the best preserved Zeus Temple in Anatolia. Ancient city excavations are being carried out by Kütahya Dumlupınar University with the support of the Presidency and the Governorship.

Excavations in Penkalas Stream yielded a large number of marble fragments, including depictions of “Aphrodite”, the goddess of love and beauty, “Dionysus”, the god of wine, and Heracles, a half-human half-god. This excavation work was done by Prof. Dr. It was made by Gökhan Çoşkun.

Çoşkun stated that after the Romans accepted Christianity, statues belonging to polytheistic belief were broken and thrown into the tea. The sculptures found have a history of 1700 years.

“After the investigations, the statues were deliberately thrown from the bridge and the flood protection walls before the demolition of the bridge. We can evaluate that the reason for this is that after the adoption of Christianity during the Roman Empire, the statues belonging to the old polytheistic religion were thrown into the stream bed for a ritual.”

It is located 57 kilometers from the city center of Kütahya and the area has been used since 3000 BC.

The ancient city came under Roman rule in 313 BC. The city lost its importance in the early Byzantine period. The ancient city of Aizanoi became a base for the Tsardar Tatars in the 13th century. Later on, it took the name Çavdarhisar. The discovery of the city was made in 1824 thanks to European travelers.

The German Archaeological Institute stated that the best preserved Zeus Temple of Anatolia was found here during the excavations carried out between 1970 and 2011. In addition, the area includes a theater, a stadium, two baths, the world’s first stock exchange, the “Meter Steunene” sanctuary, and necropolises. Around the temple, there are settlement layers dating back to 3000 BC.