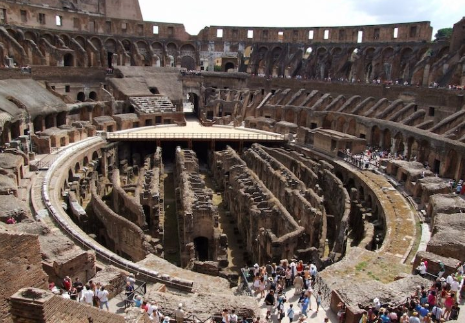 Archaeologists have found figs, cherries, grapes, walnuts, blackberries and many other food items during their excavations in the sewerage of the Colosseum.

Bear and large feline bones, which were probably used for hunting games in the arena, were also unearthed.

The discoveries were made by archaeologists examining the sewerage of the 2,000-year-old landmark.

“Remains like this provide a snapshot of the experiences and habits of those who come here for long days dedicated to performances,” said Alfonsina Russo, Director of the Colosseum Archaeological Park.

Researchers say the bear and lion bones probably belonged to animals forced to fight each other or gladiators for fun. However,  among these were also the bones of smaller animals belonging to dogs.

Work began in January 2021. The Colosseum is one of the most visited places in Italy. The work involved cleaning the nearly 70-metre-long canals and sewers below the Colosseum.

The Colosseum was the largest amphitheater in the Roman Empire and became obsolete around 523 AD. It was famous for hosting gladiatorial fights and other public performances in front of crowds of tens of thousands.

During the excavations, 50 bronze coins were found dating to the late Roman period, 250-450 AD. A silver commemorative coin was also discovered, commemorating the 10th anniversary of the rule of Emperor Marcus Aurelius from 170-171 AD.

Why is the Colosseum in Rome famous?

The Colosseum, also known as the Flavianus Amphitheater, is an oval amphitheater in Rome, Italy’s capital. Its construction began in 72 AD by Vespasian, a master commander, and was completed in 80 AD during the reign of Titus. Later changes were made during the reign of Domitian. The Colosseum has been able to accommodate approximately 50,000 to 80,000 spectators at various points in its history.

The emperors used to organize gladiatorial fights here to entertain the Roman people and a little for their own amusement. There would be many other public performances, naval battles, animal hunting, executions, re-enactments of famous battles, dramas based on classical mythology. The Colosseum was later used for various purposes as a place of shelter, business shops, religious barracks, fortifications, quarries, and Christian shrines. While its original name was Arena, it was later named after the statue at the entrance.