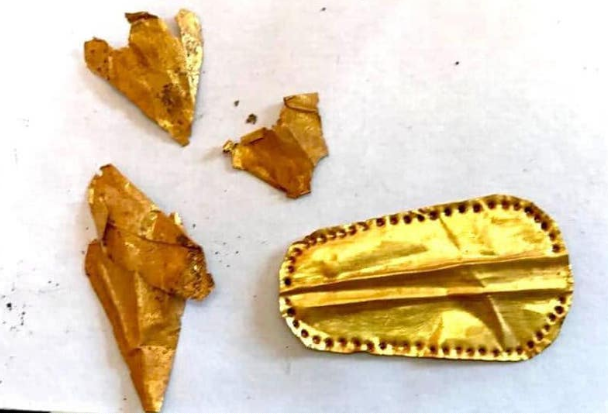 Archaeologists in Egypt have discovered tombs containing mummies with gold tongues that could symbolize life after death.

The find was found while the Quweisna necropolis, a cemetery with hundreds of graves from various eras of Egyptian history, was expanding its research area.

Excavations have uncovered numerous mummies with a golden tongue or amulet placed in the mouth of some deceased. This practice was intended to enable the dead to communicate in the afterlife and speak before the court of the ancient Egyptian god Osiris.

Why are Mummies in Egypt with Golden Tongues?

It is thought that during the mummification, their true tongues were removed and replaced with a gold object so that the deceased could speak to Osiris in the afterlife. One of the most significant gods in ancient Egyptian mythology, Osiris was known as “Lord of the Underworld” and “Judge of the Dead.”

Archaeologists have previously found similar burial practices in Egypt, such as the discovery made in 2021 at the Taposiris Magna temple in Alexandria or at the archaeological site of Oxyrhynchus near the present-day town of El Bahnasa.

The mummies’ state of preservation is quite bad, according to Mustafa Waziri, secretary general of the Supreme Council of Antiquities. However, according to archaeologists, several of the mummies were placed in wooden coffins and wrapped with thin sheets of gold.

The team also found a number of stone amulets and vessels, as well as gold artifacts in the form of clay pots, scarabs, and flowers.

The newly discovered area of the necropolis has a unique architectural style, according to Ayman Ashmawi, chairman of the Egyptian Antiquities Sector. Early research on burials, mummies, and funerary collections shows that this necropolis was used in three different periods: late ancient Egypt, Ptolemaic, and part of the Roman period.”

Numerous stone coffins, hundreds of tombs, and a huge black granite coffin for a significant priest have all been unearthed during earlier excavations at Quweisna.