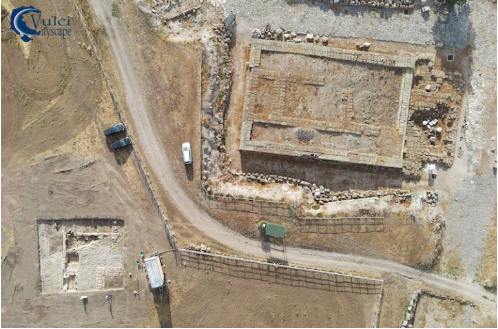 One of the greatest Etruscan Temples discovered in Italy

Archaeologists have identified one of the largest known Etruscan temple at the ancient city of Vulci in the Latium region of Italy.

An interdisciplinary team led by Dr. Mariachiara Franceschini and Paul P. Pasieka has discovered a previously unknown Etruscan temple in the ancient city of Vulci in the Latium region of Italy.

The 45×35-meter building was found west of the sacred Tempio Grande, which was discovered in the 1950s. Researchers have dated the construction of the temple to the end of the 6th or early 5th century BC.

When was the Etruscan Temple built

(Check out our orther article)

“It’s rare for monumental structures to be this similar in an Etruscan city, so it’s a pretty exceptional find,” Pasieka said.

The team discovered the temples while working on the Vulci City Landscape Project, launched in 2020, which aims to explore the settlement strategies and urban structures of the city of Vulci. Vulci was one of the twelve cities of the Etruscan federation and was one of the most important urban centers in modern-day Italy in pre-Roman times.

“We discovered previously overlooked remnants of the city at Vulci and better understand the settlement dynamics and road system, as well as identifying different functional areas in the city.”

In 2021, researchers uncovered the first part of the wall, which was made of solid pumice. “Our understanding of the appearance and foundation of Etruscan cities has previously been limited,” Franceschini explained.

“The temple’s pristine grounds provide insight into the millennial development of one of the most important Etruscan cities.”

In the coming years, the scholars want to delve deeper into the different uses of the temple and certain architectural structures to learn more about the Etruscan religion, the social structures in Vulci, and the lives of the people in the city.