The True Source of Archaeology
Archeotips > News > Courtyard, platform and well of an 8-century-old madrasa unearthed in Harran 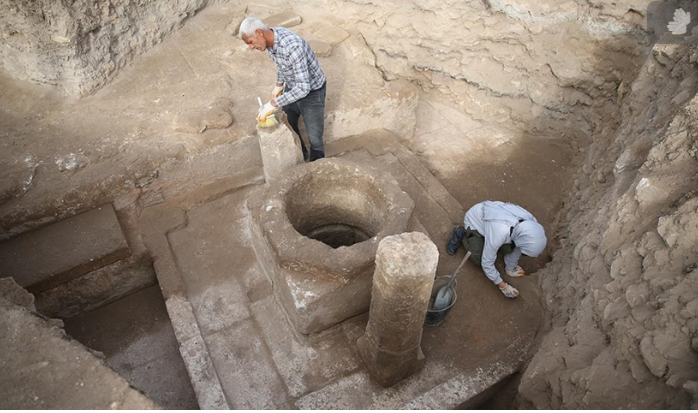 Courtyard, platform and well of an 8-century-old madrasa unearthed in Harran

The courtyard, well and platform belonging to the 8-century old Harran Madrasa were unearthed in the Harran district of Şanlıurfa. Harran, which is on the UNESCO World Heritage Tentative List, is one of the oldest settlements in the world.

Excavations are carried out under the direction of Prof. Dr. Mehmet Önal from Harran University Archeology Department.

Önal said, “The region has been an uninterrupted settlement since the 6th millennium BC. Work is progressing very well in the historical region, which was the capital of the Assyrians and Umayyads for a while.”

Harran Madrasa is located near the Historical Ulu Mosque. It is also very important in terms of the history of science. Önal said, “There were roads, corridors and lecture rooms in the area in the past years”.

Excavations are progressing intensively in the northern part of Harran.

The madrasa in one of the few ancient cities where life was lived.

The madrasa also has a 13-meter-high well, which has a very elegant structure. Önal said, “There are assembly systems and columns that are used to draw water from the well. After the other parts under the ground are removed, the entire milk and water system will be restored.”

İbrahim Gültekin (Mayor of Harran) stated that they are working hard to reveal the historical richness of the district and to carry it to the future. He also stated that studies were carried out in many fields such as astronomy, mathematics, philosophy and theology in Harran.

Gültekin said, “Harran is one of the few ancient cities with life on it. It has hosted many civilizations and has been the capital of science. The city was the capital of Assyrians and Umayyads. For this reason, the old Harran was surrounded by walls. With the excavations, more and more structures are unearthed every day.”