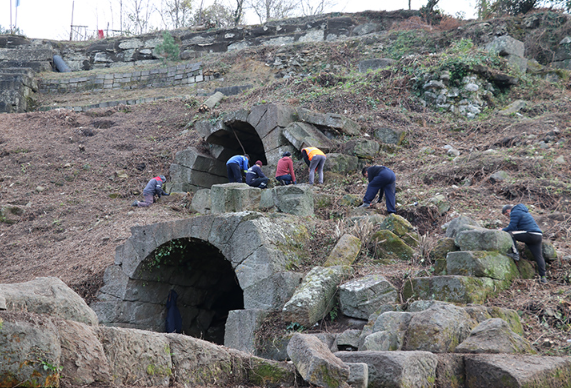 The “only” Roman theater unearthed in the ancient city of Tieion

Excavations at the Tios theater, which is the “only” ancient theater in the coastal part of the Black Sea that has survived to the present day, started again at the end of 10 years. It is thought that the theater belongs to the Roman period.

Excavations at the Tios in Filyos town of Çaycuma district began in 2006.

Excavations in the Tios resumed after 10 years. Associate Professor Şahin Yıldırım started to act as the coordinator of the excavations. Economic support came from the Zonguldak Governorate and the Turkish Petroleum Corporation (TPAO).

The capacity of the structure was determined as 5 thousand in previous excavations, but this number has been increased to 7 thousand with new studies.

Thanks to the survey, restitution and restoration works to be carried out, a new ancient building will be brought to cultural life.

Yıldırım said, “We have the chance to see the main lines of the ancient building with its architectural structure in the Roman period. The excavation work that has started again is being carried out quite quickly and well.”

“Yıldırım said, “Excavations have been going on for two weeks. During the excavations, the stones of the theater and the rows of seats were determined to a great extent.”

“The history of the theater”

“In the 1930s, 1940s, and 1950s, the theater was used as a quarry. An important part of the seating in the theater area was used in the foundations of modern buildings. In addition, important blocks belonging to the seating rows of the theater were identified during the construction of the castle. During the studies carried out in 2022, important pieces belonging to the benches were unearthed both in the north and south of the section where the benches are located.

Yıldırım said, “Tios theater holds a special place in history. The theater is the only ancient building that has survived to the present day, located on the coastal part of the Black Sea. There is a similar theater in Amasra, but only one vault has survived.”

Excavations are very exciting for archaeologists. Yıldırım said, “Excavations are very long-term. After the survey, restitution and restoration works, the theater will be put into service. The building has a capacity of 7 thousand people. Tieion is the only ancient city in the Black Sea that has not been replaced by a modern settlement.”