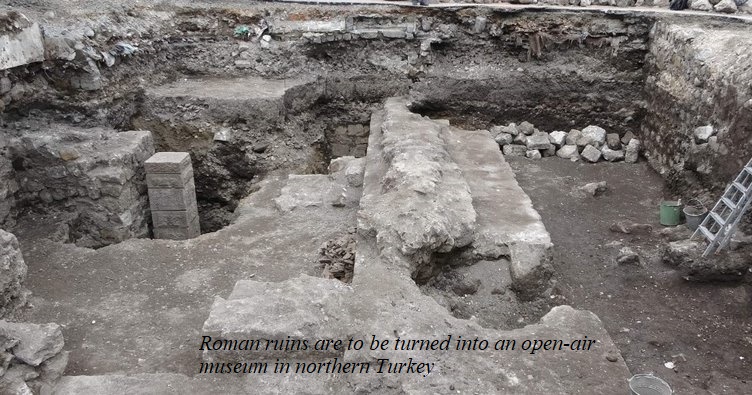 During the ongoing excavations, Roman ruins and Byzantine structures were unearthed in Trabzon, Turkey. These structures will be introduced along with an open-air museum expected to be completed in 2023.

Roman ruins and Byzantine ruins were found during the bazaar and parking lot excavations in Trabzon. Researchers immediately took the unearthed structures under protection.

Among the artifacts found are the dock, the city wall and the monumental gate from the Roman period. These artifacts will be converted into an open-air museum.

During the excavations in Trabzon, the remains were identified by seismic studies. The museum has started drilling for excavations. With this excavation, ancient Roman dock structures, a trench wall for castle protection and monumental structures were revealed. These structures brought the history of Trabzon to light.

Archaeologists found the remains of the ancient harbor walls of the Roman Emperor Hadrian. Furthermore, a section of the fortification walls constructed during the reign of another Roman Emperor, Justinian, was reached. A 150-200 meter long defensive structure and waterway from the late Byzantine period emerged.

In 2023, all of these emerging structures will be accessible through the open-air museum.

Where are the historical places in Trabzon?

Trabzon has many historical sites. The reason for this is that many empires have lived through the ages. There is localization in the Roman period, Byzantine period, Seljuk and Ottoman periods.

In terms of historical places, the first thing that comes to mind is the Sumela Monastery. During the reign of Byzantine Emperor Theodosius I, monks began to use it as a monastery. Also known as the Virgin Mary. According to a legend, during the construction of the monastery, two priests saw the Virgin Mary and Jesus Christ in their dreams and set off for the place they saw. At the point they reached, they began to build the monastery.

Apart from this, Panagia Theoskepastos Monastery, Atatürk Mansion, St. Eugenius Church and many mosques are among the must-see places. This city, which has a rainy climate, visitors can visit every season.