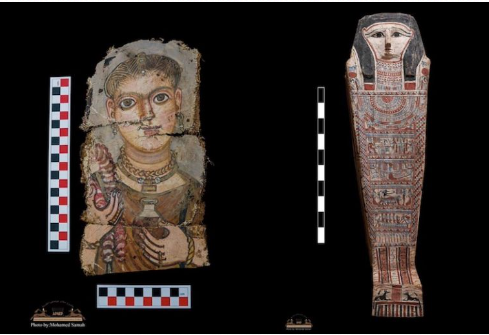 At the Garza archaeological site in Egypt, archaeologists have unearthed a large tomb structure and faience portraits from the Ptolemaic and Roman periods.

The old name of the village of Garza is Philadelphia. It was established as a central village in the 3rd century BC in the Fayyum region as part of the agricultural improvement project implemented by King Ptolemy II. Its purpose was to secure food supplies for the Egyptian kingdom, and it had both Greek and Egyptian inhabitants.

A large burial structure was found during the excavations carried out in the region since 2016. The floor of the funeral building consists of colored lime mortar and is decorated with tiles of different colors. Adel Okasha also says the remains of four columns were found around the structure.

Basem Jihad, head of the archaeological mission, says there are numerous coffins in both ancient Egyptian and ancient Greek styles. According to Jihad, this is a feature of this settlement, and many previous discoveries reflect this combination of architecture and artifacts from both civilizations.

The new discoveries also show the diversity in mummification quality that was present during the Ptolemaic and Roman dynasties.

From high-quality mummification to simple burials, Waziri says this diversity demonstrates the standard of living for the dead.

What does Fayum portraits mean?

This diversity, from high-quality mummification to simple burials, demonstrates the standard of living of the dead, says Moustafa Waziri, Secretary General of the Supreme Council of Antiquities.

Okasha claims these are the first portraits discovered since British archaeologist Flinders Petrie unearthed a group of portraits in 1907. That’s why these recently discovered portraits are considered one of the most valuable archaeological finds of this season.

Studies found a rare terracotta statue of the goddess Isis Aprodite in one of the wooden coffins, as well as a collection of papyrus documents. “Papyrus documents were written in both Demotic and Greek letters (both in ancient Egypt). They reflect the social and religious conditions of those who lived there,” said Waziri.

0 thoughts on “Tomb structure and Fayyum portraits found in Egypt”