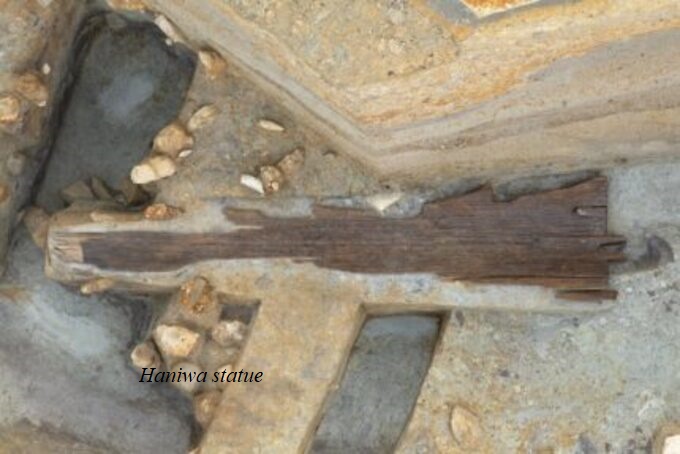 Excavations in an ancient burial mound in Habikino haveun covered the remains of the tallest haniwa statue. The site is located in Osaka in southern Japan.

Where are haniwa statue found in Japanese culture?

Haniwa statues are located on top of characteristic burial mounds of the Kofun Period (250 – 538 AD) in Japan. The statues are typically hollow tombstones made of unglazed clay. Wood specimens are extremely rare.

The statue is 3,5 meters high. Accordingly, it is three feet taler than the second tallest Haniwa statue.  It is widest area is just under 30 inches. All this makes it both  the tallest and largest Haniwa statue.

Where are haniwa statue found in Japanese culture?

The wooden Haniwa was excavated in the ditch surrounding Minegazuka Kofun, a 105-meter- long burial mound, in the late 5th century. 49 the tumuli of the Kofun Period have been designated as a UNESCO World Heritage Site due to the richness of materials from the 3rd to 6th century Japan.

According to one officals, the statue is an Iwawi – style haniwa “found in only 15 kofun tumulues in Japan so far.”

The work was made from the koyamakitree, which was preferred by the people in power at that time. Therefore, it is a very rare artifact.

Hiroaki Suzuki said, “wooden haniwa made of Koyamaki, which can grow in a few areas in Japan, has only been found in kofun tumuli in the Kinki district. In a ddition, the irnumbers are extremely small.”

What are haniwa made of?

The first haniwa were cylindrical, jar, orbell-shaped. Also, claycoils were stacked in its construction. At the beginning of the 4th century, house-shaped haniwa were developed and placed on the kofun with cylindrical ones.

Figured forms emerged in the middle of the 5th century. Haniwa in the form of objects, people, and animals were arranged in rows or groups on the edge of mounds depicting ritual scenarios. Kofun period clothes are important sources of selection, weapons, tools and architecture.