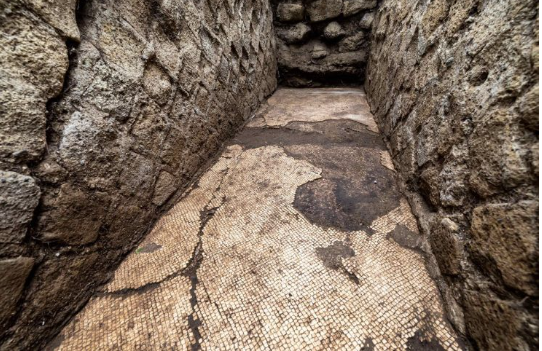 The ancient mosaic was unearthed in the Pausilypon Archaeological Park by archaeologists from the University of Naples “L’orientale”.

The park is located in the Posillipo neighborhood of Naples in Italy. Posillipo is mentioned in Greek and Roman literature. It means “respite from worry”.

The park is accessed through the 770-meter-long Grotta Seiano tunnel, which was excavated during the Roman period. The park consists of ancient structures facing the sea. The main attraction of the park is the villa of Publius Vedius Pollio, Emperor Augustus’ right hand, which was built in I BC. In addition to his villa, he built a theater that could seat 2000 people, an Odeon for small shows, a Nymphaeum, and a spa complex.

Wealthy Romans used the coastline of Campania for sumptuous villas from the 1st century BC. There is also the Vedius Pollio Mansion, known as the Imperial Mansion, which has its own theater with a capacity of 2000 people.

“Vedius Pollio and the ancient mosaic”

The villa was built by Publius Vedius Pollio in the 1st century BC. Pollio is known for his luxurious tastes and cruel attitude towards slaves. He said that if someone around him bothered Pollio, he would feed them to stone fish in an eel pond.

Upon his death in 15 BC, Vedius bequeathed his estate to Augustus, instructed to erect a monument in the area. As imperial property, the villa passed to every emperor until the reign of Hadrian, who died in AD 138.

Archaeologists from the University of Naples “L’Orientale” have unearthed a mosaic floor from the initial construction phase of the villa. The mosaic was made by Augustus after the death of Vedius from small pieces of white ressera with double black frames.

“The mosaic was part of a large hall overlooking the sea,” comments Marco Giglio of the University of Naples L’Orientale. “Although stratigraphic dating is still lacking, the hall can be dated to the late Republican period depending on how it was built.”