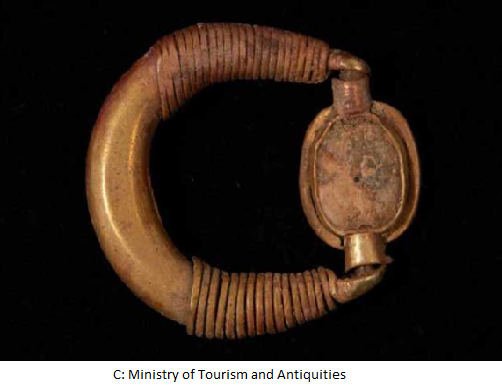 In the ancient city of Amarna, a gold jewelry collection was discovered in a woman’s tomb dating to the 18th Dynasty.

Interest in the Ancient City dates back more than 200 years, with French scholars Bonaparte’s military and exploration campaign to Egypt in 1798/1799. In 1890, British archaeologist Flinders Petrie began ancient excavations at Amarna. Petrie was assisted by young Howard Carter, who would later go on to dig Tutankhamun’s Tomb in the Valley of the Kings.

What was in the gold jewelry collection?

One of the collection is decorated with a depiction of the ancient Egyptian god Bes. The other contained three rings decorated with a hieroglyphic expression meaning “lady of the two lands”, possibly referring to the upper and lower kingdoms of Egypt.

During excavations at the Amarna Cemetery, the body of a young woman buried with a necklace of three rings made of gold and steatite (soapstone) and petal-like pendants wrapped in textile and vegetable fiber mats was uncovered.

The woman found was placed in a small pit and chambered tomb along with several other tombs dating to the 18th Dynasty (1550-1292 BC) during the reign of Akhenaten.

Work in the region is carried out by the British-Egyptian mission. Dr Anna Stevens (of the Cambridge University Department of Archeology), “The woman’s body was found in the Northern Desert Cemetery.” said.

What other artifacts were found at Amarna ancient city?

Steven also states that many historical artifacts have been discovered in the region and extensive restoration work has been carried out on different remains.

The Egyptian Supreme Council of Antiquities stated that excavation work has been ongoing by the Egyptian team since 2010. The focus of the studies is to examine the socioeconomic conditions in the ancient city and to identify the types of food most commonly consumed by the inhabitants and common diseases.

The ancient city of Amarna became the capital of Egypt during the reign of King Akhenaten, one of the leading pharaohs of the 18th Dynasty.

What was Akhenaten known for?

The king is known for his intense efforts to transform the country’s ancient polytheistic religious tradition into a monotheistic tradition centered on the Aten, the sun disc symbol worshiped by some ancient cultures.

Tutankhamen’s father, Akhanaten, moved the kingdom’s capital from Thebes to Amarna in 1343 BC. Today, the city is home to a number of temples dedicated to the Aten and royal residences that continue to attract large numbers of visitors.

The ancient Egyptian city of Amarna was not only home to the monotheistic King Akhenaten, his wife Nefertiti, and the young Tutankhamun. It also remains one of the world’s leading archaeological sites for understanding how people lived in the pre-Classical world.

Amarna also has 25 cemeteries carved into the rock of the eastern mountain where high-ranking dignitaries and priests are believed to have been buried during Akhenaten’s reign.

After Akhenaten’s death, his successors reverted to the traditional gods. They also began to move away from Atenism. Akhenaten was discredited because he was referred to as “enemy” or “criminal” in contemporary records of the time.