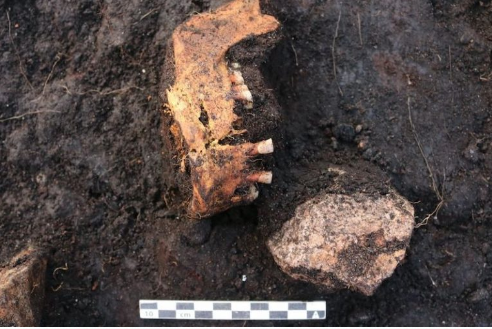 A ‘swamp corpse’ found in a swamp in Denmark may be the remains of a human sacrificed during the Neolithic period.

Archaeologists have discovered the skeletal remains of a swamp corpse alongside the remains of a flint ax and animal bones in Denmark. The findings indicate that this person was ritually sacrificed more than 5,000 years ago.

So far, little is known about the victim, such as the person’s gender and age at the time of death. However, researchers think the body was deliberately placed in the swamp during the Neolithic period.

Excavation head Emil Struve said: “This is the first phase of the Danish Neolithic period. We know that traditions of human sacrifice go back this far – we have other examples of this.”

To date, dozens of bog bodies have been found in Northwest Europe – particularly in Denmark, Germany, the Netherlands and Britain, where human sacrifice in swamps has been ongoing for several millennia.

Struve said, “There are several different bog bodies in the area here. It’s a tradition that goes back to the Neolithic period.”

The archaeological team found the latest bone remains ahead of the construction of a housing development in October. The area now dried was a swamp on the greater island of Zealand and near the town of Stenløse, just northwest of the Danish capital Copenhagen.

Struve says that Danish law requires archaeologists to examine the entire land to be built on, and that the first bones of the Stenløse bog corpse were found during a test excavation in the area.

Archaeologists will now fully excavate the site, as the ground ice melts in the spring. However, initial excavations revealed leg bones, a pelvis, and a fragment of a lower jaw with some teeth still in place. Other parts of the body were left outside a protective layer of peat in the swamp and were not protected.

Struve hopes that the sex of the body can be determined by the pelvis, and that the wear on the teeth can indicate the age of the individual. Additionally, teeth may be sources of ancient DNA that may reveal more about a person’s identity.

Struve says the flint ax head found next to the swamp corpse was not polished after it was made and may never have been used, so it seems likely that it was an intentional offering as well.

The world’s oldest bog body, known as the Koelbjerg Man, was found in Denmark in the 1940s and can be dated to 10,000 years ago, with others dating to the Iron Age in the region to around 2,500 years ago.

One of the most famous and best preserved bog corpses is the Tollund Man, which was found on Denmark’s Jutland Peninsula in 1950 and is thought to have been sacrificed around 400 BC.

A few of the swamp corpses appear to be accident victims who drowned after falling into the water, but archaeologists think most were killed on purpose, perhaps as human sacrifices during times of famine or other disaster.

Miranda Aldhouse-Green, emeritus professor of history, archeology and religion at Cardiff University, says ancient people were probably aware that swamps could preserve bodies: “If you put a body in a swamp, it won’t rot, it’s stuck between the world of the living and the dead.”