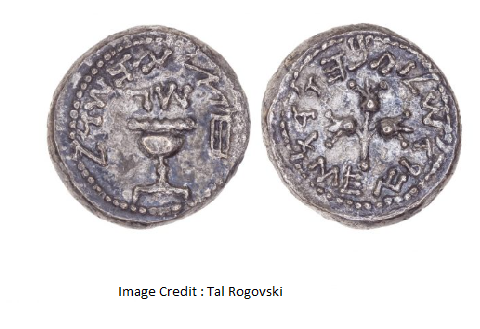 A very rare half shekel coin from the period of the Great Revolt has been unearthed in Jerusalem.

Known as the great revolt, the uprising was the first of the Jewish population in Judea to rise up against the Roman Empire.

What was the period of revolutions?

As a result of increased religious oppression and high taxation by the Romans, an uprising broke out. The revolt resulted in the looting of the Second Temple and the arrests of high-ranking Jewish political and religious figures.

Because of the rebellion, the Romans mobilized four Legions to suppress the rebellion and punish the Jewish people. After the legions reached Jerusalem, the city was under siege for four months in AD 70.

After several battles, the city and the Second Temple were destroyed. Contemporary historian Titus Flavius Josephus states, “Jerusalem was so razed to the ground that there is nothing left to convince that it was inhabited in the past.”

The study was carried out by archaeologists from the Hebrew University in the Ophel region south of the Temple Mount. A collection of coins from the period of the great Rebellion appeared in the area.

The vast majority of coins are made of bronze. However, coins from 69/70 AD are made of silver and are extremely rare half shekels. These coins are one of only three examples found in Jerusalem.

During the revolt, the Jewish inhabitants of Jerusalem minted bronze and silver coins. The vast majority of silver coins had a picture of a goblet on one side. On it was written the year of the Revolt in Hebrew.

There was also an inscription on the edge of the coins that read “Israeli Shekel”, “Half Shekel” or “Quarter Shekel”, depending on the currency. On the other side of them was a branch with three pomegranates surrounded by the inscription “Holy Jerusalem” in ancient Hebrew letters.

Before the revolt, the Romans were responsible for the production of coins. The minting of coins was an expression of national liberation under Roman rule.

As a result of the researches, half shekel coins (with an average weight of 7 grams) were used to pay the “half shekel” tax to the Temple. Every adult Jewish male contributed annually to help pay for their worship.

Dr Farhi said, “Until the revolt, the half shekel tax was paid in Lebanese fine silver coins. These coins were minted in Tire and were known as the ‘Tyrean shekels’ or the ‘Tyrean half shekels’. On these coins, there was a picture of Herakles – Melqart, the main god of Tire. On the reverse was an eagle surrounded by a Greek inscription. It means ‘Tyre the holy and the city of refuge’. In this way, it was aimed that the silver coins produced by the rebels would replace the Tyrannical coins by using more appropriate inscriptions and replacing the images with symbols.”

Silver coins from the Great Revolt are the first and last coins known as ‘shekels’ in ancient times. Later use of this name was in 1980 on Israeli Shekel coins produced by the Bank of Israel.