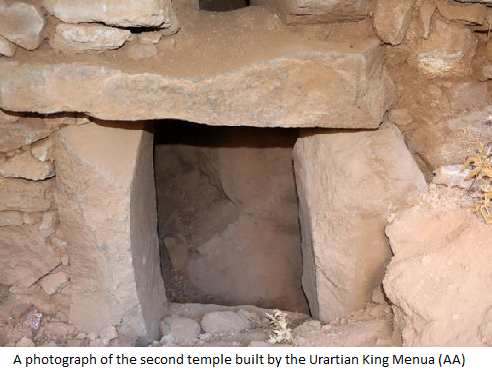 The second temple built by the Urartian King Menua was found

The second temple built by Urartian King Menua appeared in the area where Körzüt Castle, built in the Urartu period, is located in Van. Next to the temple, the chamber tomb was also unearthed.

This year’s part of the excavations carried out in the area where the Urartian castle is located has been completed.

Important findings were found in the castle built by the Urartian King Menua on the rocky area in the Muradiye district.

Who is Urartian King Menua?

The excavation, which started two months ago, revealed the second temple without rizalite (without corner protrusions), the remains of a stone masonry chamber tomb built with the overlapping technique, as well as sherds and metal artifacts.

The excavation was partially completed this year due to meteorological conditions. The works will continue at full speed next year.

“The grave found is very important”

Erdogan said, “We came across very important findings in terms of the history of the region in the area where the castle ruins are located.”

Erdogan said, “The finds were used in different periods. It is quite surprising that the second temple was found in the area where the temple was discovered as a result of the excavations carried out a while ago.”

“During the excavation, the second temple thought to have been built by King Menua was unearthed. Next to the temple, we encountered an important tomb. A large number of Urartian pottery was found in the area. There are ceramics from the Middle Ages here. These are used for the second time. There is a very important necropolis outside the castle. Here, too, we encountered various types of tombs. The most important are masonry tombs. We found one of the stone masonry tombs in the region in the past. Differently, we are talking about a masonry tomb without a capstone. This turned out to be an innovation. Grave is very important in terms of diversity. Along with many pottery, metal artifacts and dead artifacts from the Urartian period are found.”

Historical kingdom whose capital is Tuspa (Van). The most powerful period of the state was the 8th – 7th centuries BC. They were dominant in the present-day Eastern Anatolia Region, Northwest Iran, a small part of Iraq and the Aras Valley in the north.