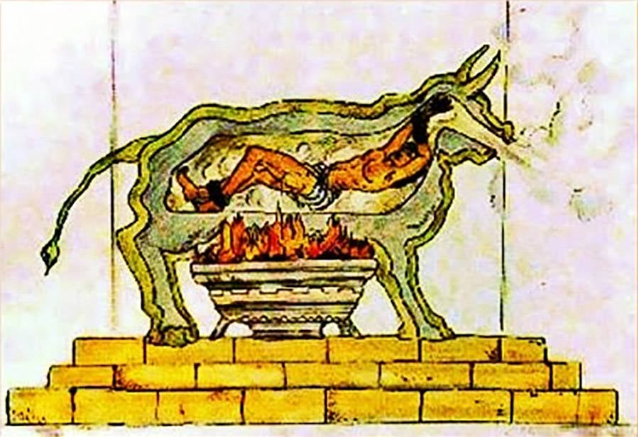 The most painful torture tool in history “Brazen Bull”

The brazen bull was an tool of torture and execution designed in ancient Greece. The brazen bull is also known as the Sicilian bull or bull of Phalaris.

The life-size bull-shaped brass or bronze statue was hollow. In this way, the victims were locked in the stomach of the bull and burned alive. Thanks to flute-like pipes, the victim’s cries created animalistic music. Smoke from roast meat rippled like pulses of incense.

Athenian brass casting and court sculptor Perillos invented this cruel tool to win Phalaris’ favor. Phalaris was ruler of Agrigentum, a prominent Greek colony in Sicily, in the mid-6th century BC. The aim was to make the person to be executed suffer more.

“Invention of the Brazen Bull”

“The screams will come to you as the softest, saddest, most melodious roar through the pipes,” Perillos said after he had finished building the execution device.

It is said that after the words, the ruler put Perillos inside the execution instrument and ordered a fire to be lit under the invention. Burned alive by his own invention, Perillos was pushed off a cliff just before his death.

Phalaris used his torture tool for years to execute enemies and suspected foreigners. These executions terrified those who wanted to rebel against him. Eventually, the city rebelled against him, and they put him in their torture tool to die in agony in 554 BC. Some sources state that the terrible tool of torture was thrown into the sea. According to some sources, it is said that he was sent to Carthage by the military general Hamicar Barca, who occupied Sicily in 247 BC during the First Punic War with Rome.

The number of people Phalaris killed with this bull is not included in historical records. However, the invention was quite popular in Roman times.

Herodotus mentions that in ancient Greece, roasting in a bull was a well-known method of torture.

Who was executed by the Brazen bull?

The Romans used this torture instrument for some Christians. Saint Eustace, his wife and children were executed in a bull by Emperor Hadrian. Emperor Domitian had Saint Antipas, Bishop of Pergamon, executed. Antipas was the first person to be martyred in Asia Minor.

The instrument of torture lives on today in modern-day movies, where people are still fascinated by this method of torture.