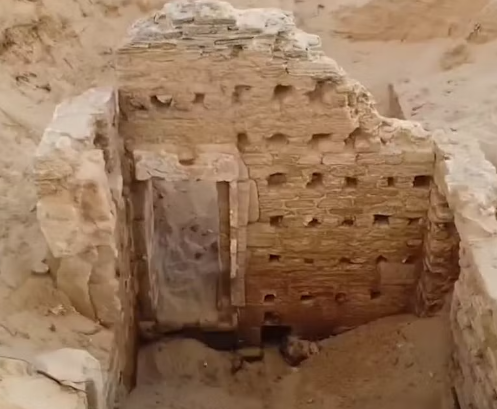 Archaeologists have unearthed a Roman fish farm, bath (in Los Canos de Meca), and a Bronze Age tomb. The tomb was found under the dunes surrounding Cape Trafalgar in the city of Cadiz, in southwest Spain.

The area at Cape Trafalgar covers approximately 2.5 acres. The sand dunes can reach 20 meters in height and 300 meters in width.

Cape Trafalgar is also famous for Admiral Nelson’s victory in 1805, which defeated Napoleon’s fleet, ending the threat of a French invasion of England.

“Trafalgar was famous for warfare until today, but will now be recognized for discoveries thousands of years ago,” the University of Cadiz said in a statement. A Roman fish farm and Bronze Age tomb were found under the dunes.

Two rooms have been excavated at the site so far, and much of the site remains untouched. Some medieval ceramics from the 12th and 13th centuries were also found near the baths found.

The tomb is the best preserved Bronze Age tomb ever recovered in Spain. At least seven skeletons were found inside the tomb, adorned with gold and silver jewelry, a bone comb, and a beaded necklace. Among them was the skeleton of an adult woman.

Prof Dario Dernal Casasola from the University of Cadiz stated that “The grave was excavated over time and the remains of other people were added.”

In addition to the Roman fish farm, the salting facility where the tuna was salted was also unearthed. Garum, a fermented sauce made from fish guts and herbs, was also made at the facilities.

“What was revealed in Los Canos de Meca?”

Archaeologist Dario Bernal noted that “The baths provide hygiene and entertainment to the workers of the fish traps and salting factories in the area.”

As a result of the work of its archaeologists, the Roman Bath was also unearthed at Los Canos de Meca, a little distance from the coast.

The Roman bath, called Thermae, has been preserved under the sand for 2,000 years, helping us learn about how the Romans bathed, exercised and relaxed.

The bath is decorated with red, white and black plaster and marble. It was also excavated buried five meters below the surface.