The True Source of Archaeology
Archeotips > Archaeology > The 11,000-year history of the Ancient City of Syedra is unearthed 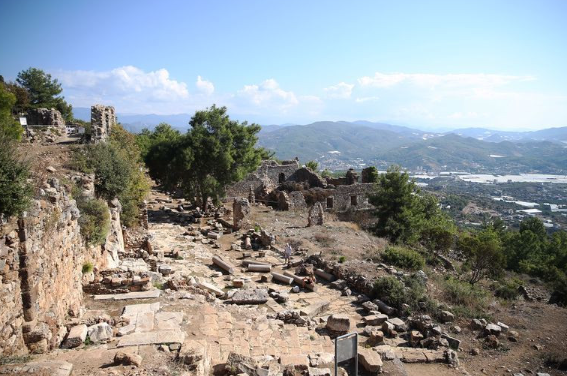 The 11,000-year history of the Ancient City of Syedra is unearthed

The ancient city of Syedra is 20 kilometers east of Alanya, which is within the provincial borders of Antalya. The ancient city excavations were first carried out between 1994 and 1999. As a result of the excavations, it was understood that the history of the city dates back to the 9th century BC.

Associate Professor Ertuğ Ergürer (Karamanoğlu Mehmetbey University Faculty of Letters, Department of Archeology) stated that “As a result of the excavations that have been going on for 4 years, the ancient city has been unearthed”.

Ergürer said, “We have been working in 12-month periods for the last two years. The works of the bath, the parliament building and the road at the bottom of the bath were completed this year. Work on the new season will start in January without a break.”

“We want people to walk on the stairs of the ancient city by connecting the wooden walkways made with the permission of the Ministry to the original stairs and pathways of Rome. When this comes to life, we will have a two-hour tour route.”

What is in the Syedra Ancient City

There is a church and a baptismal place in the ancient city of Syedra. The cave in the area is under protection. It also has very beautiful mosaics. The Heracles figures in the mosaic where the 12 Jobs of Heracles are engraved are in normal human dimensions. The Roman bath found is preserved up to the roof.

The number of people visiting the Syedra Ancient City has exceeded 20 thousand per year. Looking at the architectural structures in the ancient city, it is understood that it had a population of 5-6 thousand in the past.

Syedra Ancient City Transportation: The Ancient City is located in the upper part of Seki Village, 22 km from Alanya. The village is on the Alanya Gazipaşa road. On the way to Gazipaşa from Alanya direction, after passing Kargicak, you need to enter Seki Village on the left. From here, there is a distance of 3 km to the ancient city. It is possible to reach the car park of the ancient city by car.

Syedra Ancient City Entrance Fee : There is no fee for visitors to enter the Ancient City.