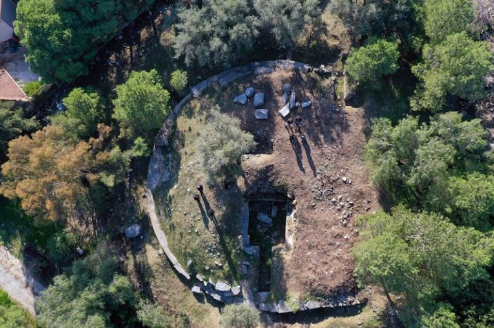 2,350-year-old tumulus unearths in the ancient city of Pygela

A tumulus built 2,350 years ago for a senior executive was unearthed in the ancient city of Pygela in the Kuşadası district of Aydın.

A survey was carried out in 2022 by Associate Professor Aydın Erön from Aydın Adnan Menderes University and his team in the ancient city of Pygela, located in the Kustur location in the Bayraklıdede District of Kuşadası.

Between 1974 and 1978, excavations were done in a portion of the tumulus, although not all of it.

Erön, we have located the tumulus, which has been known since the 1950s but was covered over time. Reconnaissance work has also begun.

It is thought that the Kustur Tumulus is one of the mausoleums built in the Hellenistic period. According to Erön, “The tumulus in question was a construction that had not recently been explored,. It is crucial for us to be able to restore and advertise this framework. Because they are uncommon among graves from 350 to 300 BC.”

“It has already demonstrated to us how expertly the walls are built. We received assistance from Adnan Menderes University and the Provincial Directorate of Culture and Tourism in 2022. This mausoleum’s surroundings could be cleaned thanks to our opportunity. In terms of local tourism, we consider it to be a very useful tomb. There are not many such mausoleums related to the period. If such a mausoleum is unearthed and exhibited in Kuşadası, the region will be able to be followed by more visitors.”

The tumulus in question remains almost as it was on the first day in a circular area with a diameter of 23 meters. Researchers say that it is very difficult to find such a solid mausoleum in Western Anatolia.

History of the ancient city

The name of the city of Pygale is first encountered in the famous historian Strabo’s book “Geographika”, which deals with ancient Anatolian geography. According to the belief in Strabo’s time, some oracles told the famous commander Agamemnon’s soldiers, whose hips were inflamed at the end of the Trojan War, that they could be healed by being treated here.
Thereupon, Agamemnon and his soldiers stayed here for a while and were treated. Then they founded the ancient city. The name “Pyge”, meaning hip in the ancient Greek language, was given to the city. It became known as Pygale.