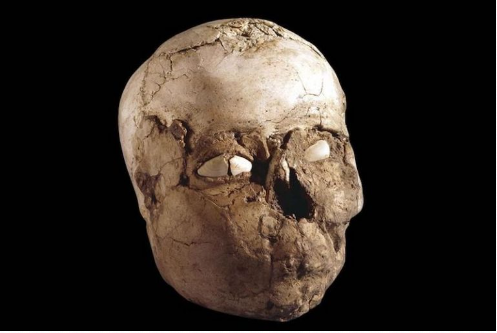 Thanks to cutting-edge reconstruction techniques, the Jericho Skull, which was buried 9,000 years ago with seashells in its eyes, now has a new face.

A famous 9,000-year-old human skull discovered in Jericho now has a new face thanks to the efforts of a multinational research team.

It was unearthed in 1953 by British archaeologist Kathleen Kenyon. The Jericho Skull, now in the British Museum, was covered in plaster, probably to make it look more realistic, and seashells were placed in its eyes.

“First facial reconstruction in the world”

In 2016, the British Museum published precise measurements of the Jericho Skull based on microcomputed tomography (effectively a very detailed X-ray scan). The measurements were then utilized to model the skull virtually in three dimensions. The model was used to make the first facial animation.

But the new study, published online in the journal OrtogOnline, uses different techniques to determine what the face looks like and goes further, adding head and facial hair in an artistic way.

The skull was initially believed to belong to a lady, but subsequent observations showed that it actually belonged to a guy, according to Moraes.

Therefore, the face in your new prediction is that of a man in his 30s or 40s with dark hair. (Based on how a lesion on his skull healed, archaeologists suggest he was “middle-aged” by today’s standards when he died.)

According to Moraes, the skull of the Jericho Skull in the British Museum is unusually massive for its age. Additionally, the skull appears to have been artificially elongated when the man was very young, possibly by tying it tightly. Some of the other plastered skulls found by Kenyon also show signs of this, but the reason for this practice is unknown.

One of the oldest settlements in the world is thought to be Jericho, a Palestinian city in the West Bank.

Archaeologists have determined that Jericho has been inhabited continuously for about 11,000 years. In 1953 Kenyon unearthed seven skulls in a field near this settlement.

Each was covered with plaster, and the cavities inside the skulls were filled with earth. There were also seashells placed over the eye sockets and some had traces of brown paint.

Kenyon speculated that the skulls might be portraits of some of Jericho’s earliest inhabitants. But since then, more than 50 plastered skulls from around the same period have been found in the area. These are now thought to be the remains of a burial.

Moraes says he couldn’t find many details of the facial reconstruction from 2016. But he appears to have used what’s known as the Manchester method, which has been developed since 1977 and based on forensic analysis.

This method is now widely used, especially for facial estimations of crime victims.

However, the most recent study used a different approach, based on anatomical deformation and statistical projections from computed tomography (CT) scans of living people (thousands of X-ray scans interwoven to create a 3D image).

The techniques are also used to plan plastic surgeries and fabricate prosthetics (artificial body parts). But, neither was used in the 2016 study.

“No, I wouldn’t call ours an update; rather, it’s a new strategy. But there is greater structural, anatomical and statistical consistency.”

Moraes hopes to perform digital estimates of other plastered skulls in the area. But only precise measurements of the Jericho Skull in the British Museum have been published so far.

“These instances are shrouded in considerable obscurity. We are discovering new things about parts thanks to new technologies, but there is still a lot to explore.”