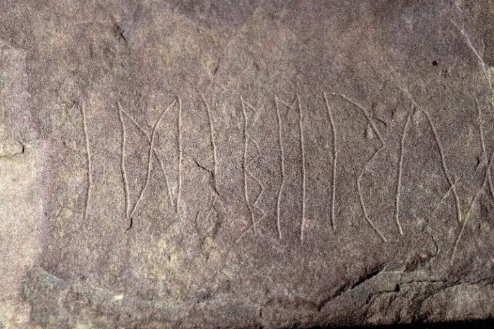 The inscriptions are as old as 2,000 years and date back to the earliest days of the mysterious runic writing. Archaeologists claim that this is the world’s oldest runic inscription stone.

The Cultural History Museum in Oslo notes that the flat, square block of brownish sandstone has engravings that may be the earliest example of written words in Scandinavia.

“The oldest runic stone ever dated and one of the earliest runic inscriptions ever discovered.”

The University of Oslo’s Kristel Zilmer stated: “This discovery will teach us a lot about the usage of runic writing in the early Iron Age. One of the earliest attempts to employ runic lettering on stone in Scandinavia and Norway may be this one.”

The stone was discovered during a grave excavation near Tyrifjord in late 2021. Items from the cremation pit – burnt bones and charcoal – indicate that the runic inscription was probably written between AD 1 and AD 250.

Researchers say they needed time to analyze and date the runic stone, so a year later the true date emerged.

The 31 cm by 32 cm stone has several types of writing, but not all of them are linguistically significant. The eight runic symbols on the obverse of the stone contain the word “idiberug,” which could be the name of a woman, a man, or a family.

Zilmer describes this discovery as “the most sensational thing I’ve ever had as an academic.”

There is a lot of research to be done about the inscribed stone called the Svingerud stone, after its location.

We will surely learn a lot about the early development of runic writing, Zilmer said.

The runic stone will be on display for a month at the Cultural History Museum, which has the largest collection of historical artifacts from Norway’s Paleolithic period to modern times, starting January 21.